Christine Hart was born in Germany in 1971; her father is German and her mother from Seville, Spain. The family moved to Barcelona when she was five years old, she grew up there and went on to study a degree in Law. After graduating and  attending a number of different job interviews, she decided to give up the legal profession and try her luck in the fashion world. She approached the Barcelona branch of an international modelling agency, but was met with a negative reply: at 25, she was considered too old to start out a career as a model. Despite this initial setback, Hart moved to Milan, where she managed to carve out a space for herself in fashion as a commercial model.

Having travelled the world over, living in the USA, France, Italy and even Australia, Christine Hart finally opted to return to Barcelona, together with her family, and study Narrative and Creative Writing at the Barcelona Athenaeum School for Authors.

During her ten-year career, Hart worked with internationally-renowned photographers, such as Helmut Newton, Bruce Weber, José Manuel Ferrater, Javier Vallhonrat and Manuel Otomuro. She starred in campaigns for prestigious brands and appeared in numerous TV ads, some of which can be viewed on her personal website: www.christinehart.com

Christine Hart ventures into the world of publishing with her first book, The Stories Models Never Tell, a deeply intimate, thoroughly personal project. To avoid falling into sensationalism, or creating a purely commercial, media-centred work (as suggested by the large publishing houses), Hart chose to set up her own firm, enabling her to present the reader a genuine autobiography, narrated in a way that's both transparent and absolutely sincere. There's no fiction here, nor the superfluous anecdotes that some editors demanded as a way to increase sales.

In this, her editorial debut, the author has not only written, but also edited and published the book herself. She has opted to recount true stories, to provide readers with a wider, more realistic viewpoint of a profession often presented as a fairytale. This decision emerged from a new feeling, that of a first-time mum, and a duty: to reject the hype and confess the facts that rarely come to light.

Christine Hart is an outsider to the publishing world, but feels this “intrusion” is justified by a clear objective: that her book may serve as a warning to those mothers who long to see their daughters on magazine covers yet remain unaware of the risks entailed in navigating these waters, infested with sharks and piranhas. 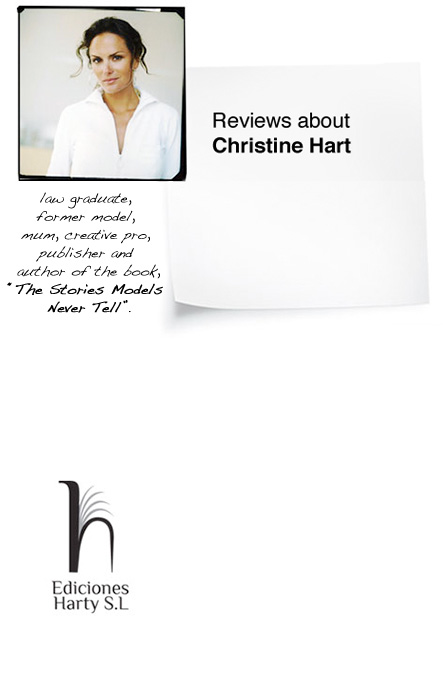